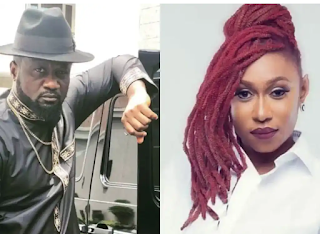 Some Nigerians on social media have reacted to the contract deal released by music Director, Jude Okoye, which revealed that Cynthia Morgan and the Northside Music had a 50/50 sharing formula rather than the claims she made of being used and dumped.

Morgan had over the weekend claimed that she lost all she had,including her name, VEVO account, Instagram account and royalties after they had some issues centering on her contract.

However, Jude Okoye had since dismissed Morgan’s claims.

The Music Director, who also explained that the contract had an option to renew for two further years, released the details of the contract on Tuesday.

The recent development has since triggered different reactions from Nigerians who have taken to Twitter to drag her for lying and allegedly playing the victim card after accusing Okoye of wrecking her career.

Here are some comments gathered online:

@Irunna ”So Cynthia Morgan lied. Please how do we get back the money we donated because I donated my school fees please”.

@fowel_anselem ”So Cynthia Morgan went to IG live without a makeup tied scarf like a grandma so people can think she dey suffer, I swear Cynthia Morgan and Lai Mohammed need a Governor Wike in their life right now”.

@ Talktoriam ”So Cynthia Morgan dem say make you do IG live you con Dey lie are you sure you will come back to the industry like this. Fry dodo you maggie, you see say you no serious so. your matter tire me joor”.

@ Aprokodoctor ”So Cynthia Morgan lied? The easiest way to get Nigerians on your side is to tell an emotional story and sprinkle some tears for effect. Works every time”.

@Bigman_xander ”So cynthia morgan lied? This shows that women will cry and attempt to kill themselves and still be lying”.

@Dynasty ”This Lie is so Legendary that she can be used as an expression For Liars in English Language”.

@brysonadahcole ”So Cynthia Morgan is the best example of the unpopular quote that says, “a woman can cry you a river and still be lying. The superior problem gender definitely knows how to play the victim card perfectly.”

@missgoldie4 ”So Cynthia Morgan went to IG live without a make up tied scarf like grandma so people can think she dey suffer, I swear Cynthia gbemi ni handicap 2.5”.

@Tosinolugbenga ”So Cynthia Morgan played the victim card and most of you fell for it. Using public sympathy, she lied against Jude, opened a gofundme account and deceived you all. A trash would always remain a trash even if Davido picked the call”.

@kidee_lb ”Lmaooo so Cynthia Morgan lied, i am not surprised at all, typical shit women do, always playing victim.”

@Bobby ”So Cynthia Morgan decided to play the Victim card because she knew Nigerians always fall for that trick, it’s always essential to hear both parts of the story before you judge!”

@Akunwa ”So Cynthia Morgan wanted to stage a comeback and chose to soil Jude’s name to gain public sympathy. That gofundme account should be reported and taken down. That’s another level of witchcraft”.

@theolaoflagos ”So Cynthia Morgan carried people on handicap. My concern is what will happen to the people who took out of their sweat to donate something in the Gofundme account?”

@Timmie ”So Cynthia Morgan scammed us all? At this point I will be forced to stop jumping on all these trends because we don’t even know the truth anymore! I blame myself seriously for attaching too much importance to this.”

@secretaryace ”So Cynthia Morgan lied afterall. The whole story just shows that you may be talented, but it is your attitude and choices that will determine how far you go in life”.