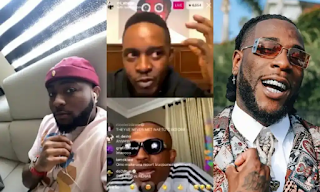 The feud between the two singers triggered a ‘storm’ on social media over the weekend.

But Naeto C and M.I want Burna boy to understand that Davido has worked very hard despite his father’s wealth.

Naeto C said that Burna Boy was wrong to have used Davido’s wealthy background against the OBO.

The two rappers spoke in an Instagram Live chat.

He called on Burna Boy not to feel entitled because Davido has proven over the years that he really deserves everything he earns.

“The problem is that a large portion of Nigerians feel entitled and hate what they called the establishment,” he added.

“So because he comes from a well-to-do family or what have you, he’s the enemy? He’s not the enemy. He works harder than you. David works hard. I mean, real hard.”

M.I added, “He [Davido] is not the first. I mean he’s not the first. There are many people with a lot of money who tried to crack this music industry but couldn’t make it.”

Both men ended the live chat saying, “Shout out to David.”

Burna Boy had caused a stir when he implied that Davido was not talented but only got fame and popularity from his family’s wealth.

The Grammy Awards nominee said this in reaction to a post by Davido where the “1 Milli” crooner referred to himself and Wizkid as the greatest in the Nigerian music industry.