Singer Skales Reveals What Wizkid Told Him About Rema 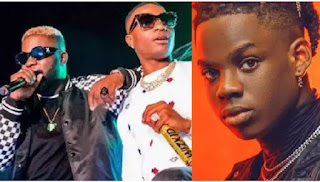 The former president listed ‘Anybody’ by Burna Boy and ‘Iron Man’ by Rema in his favourite music, alongside 33 others.

This is the second time Obama will list Rema’s song in his playlist. In July, he listed ‘Iron Man’ in his summer playlist.

Skales speaking on Rema’s Influence in music and making a lasting impression, revealed that Wizkid believes the Mavin Singer is a star and was going to last in the industry.

On his Twitter page, he wrote: “I remember me telling Wizkid that I hope Rema is going last and told me he’s had some of his stuff and the boy is a star.