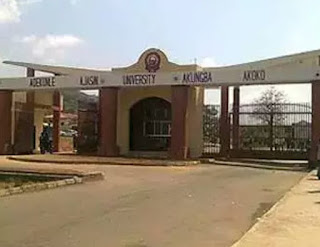 The father the final year student of Adekunle Ajasin University, Akungba Akoko, (AAUA) who was swept by the flood, Mr Joshe Boluwaji, has expressed optimism that her daughter, Doyin, is still alive.

Boluwaji who stated this on Thursday while receiving members of the Ondo State Executive Council at his residence in Akure, the state capital, said the young lady would be rescued alive, saying “my daughter will come back alive but still trapped somewhere”.

He expressed surprise over the incident, noting that the accommodation secured for the girl when she was admitted into the school was never a canal.

Speaking earlier, the Chief of Staff to the governor , Chief Olugbenga Ale who led the delegation, cautioned residents against building on waterways to avoid flooding and destruction of property and lives.

Chief Ale disclosed that the state government still look forward to acquiring more amphibian excavators to clear waterways and to tackle ecological problems in the state.

The final year students of AAUA was reportedly swept away by flood last Monday when trying to leave her house to avoid being trapped in her house following a heavy downpour.