Don Jazzy Reveals Why ‘Weed’ Should Legalized In Nigeria 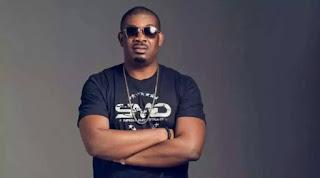 Mavin Producer, Don Jazzy has called for the legalization of weed in Nigeria.

Don Jazzy on his social media page, condemned the criminalization of ‘weed’ in the country.

On his Twitter page, he wrote: “In Nigeria, we spend 100s of bns annually on imported tobacco products and that can be very injurious to our economy in the long term.

“Cigarettes has also contributed to environmental pollution as it causes many non communicable diseases, increases carbon proliferation and hugely adds to toxic trash volume around the country.

“How can we achieve this legally? I might not be a student of law but I can at least give my opinion here. I think there are so many conflicting laws on Cannabis ‘weed’ legislation.

“The Dangerous Drugs Act of 1935, the Indian Hemp Act of 1966 and the NDLEA & NAFDAC Acts amended in 2004 are very vague and need to be reviewed by the National Assembly.

“Maybe Drugs and Cannabis can be moved to the concurrent list in the constitution, so that state houses of assembly can legislate on them just like in the United states.

“Regulatory bodies can be established at the federal or state level to give licenses and rules to interested weed cultivators who should be made to adhere to enacted guidelines.

“With the global cannabis industry projection of about $200 bn earnings by 2030, it would be advisable for Nigeria to make hay while the Sun shines.”

Title : Don Jazzy Reveals Why ‘Weed’ Should Legalized In Nigeria
Description : Mavin Producer, Don Jazzy has called for the legalization of weed in Nigeria. Don Jazzy on his social media page, condemned the crimina...
Rating : 5