Metropolitan Police Are Expecting Me Back At Work – #BBNaija’s, Khafi Says 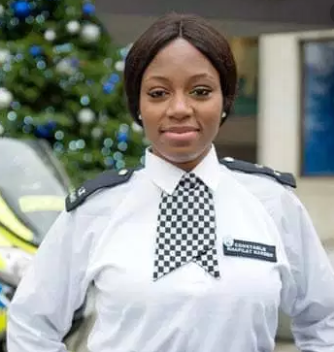 Khafi Kareem, the former housemate in the 2019 BBNaija show, has refuted claims that she has been sacked by the Metropolitan police UK where she served as an officer before auditioning to compete in the Big Brother 2019 edition.
The 29-year-old gave the calrification in an interview with SaharaReporters. Khafi says the authorities of the Metropolitan Police are infact expecting her back at her duty post as soon as possible.
Recall that while she was still in the show, the Sun newspaper UK published a story claiming that the Metropolitan police was embarassed by her ''s3xcapdes'' with Gedoni and are contemplating terminating her appointment. It was alleged that she failed to seek approval from her organization before going for the competition.
However, in the interview with Sahara, Khafi said she would be travelling to the UK soon and that her employers are waiting for her to get back to work. In her words

“No action has been taken By the Met Police authorities yet. In fact, they are waiting for me to come back to work. I will travel back to the United Kingdom soon and we would talk about all these things.”

Since coming out of the house, Khafi has granted series of interviews where she denied having any s3xual relations with Gedoni while they were in the house.

Title : Metropolitan Police Are Expecting Me Back At Work – #BBNaija’s, Khafi Says
Description : Khafi Kareem, the former housemate in the 2019 BBNaija show, has refuted claims that she has been sacked by the Metropolitan police UK ...
Rating : 5

0 Response to "Metropolitan Police Are Expecting Me Back At Work – #BBNaija’s, Khafi Says"