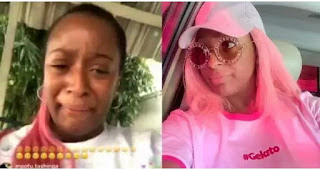 Popular female and singer, Dj Cuppy, has revealed why she broke down in tears during a live Instagram video session.
Recall that the disc jockey broke down in tears live on Instagram some few days ago which has left her fans confused on what could have led to that.
DJ Cuppy has now taken to her Twitter account to clear the air, as her action drew concerns among her fans across Nigeria and the rest of the world.
In her post she wrote that though she had it rough at that time, however things are back in their rightful place and she is stronger than she could ever be.
She wrote:
Dear Cupcakes… Went through a bit of a rough patch but now I’m back stronger than ever! Thanks for your concern and messages!💕#GELATO