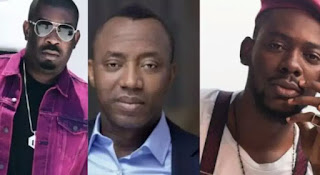 Nigerian celebrities have joined in the reactions trailing the charges brought against human rights activist and pro-democracy campaigner, Omoyele Sowore, by the Nigerian Government.

Nigerian government on Friday placed a seven-count charge of treasonable felony and money laundering against detained activist and Convener of #RevolutionNow protest, Sowore.

Sowore, a presidential candidate in the February 2019 presidential election was charged along with Olawale Bakare, also known as Mandate.

The charges were signed on behalf of t‎he Attorney-General of the Federation and Minister of Justice, Abubakar Malami (SAN), by Aminu Alilu, a Chief State Counsel in the Department of Public Prosecutions of the Federation‎, the Federal Ministry of Justice.

In the charges instituted against the defendants, the prosecution accused Sowore and his co-defendant of committing conspiracy to commit treasonable felony in breach of section 516 of the Criminal Code Act by allegedly staging “a revolution campaign on September 5, 2019 aimed at removing the President and Commander-in-Chief of the Armed Forces of the Federal Republic of Nigeria.”

The prosecution also accused them of committing the actual offence of reasonable felony in breach of section, 4(1)(c) of the Criminal Code Act, by using the platform of Coalition for Revolution, in August 2019 in Abuja, Lagos and other parts of Nigeria, to stage the #RevolutionNow protest allegedly aimed at removing the President.

Reacting, Mavin producer, Don Jazzy called on President Muhammadu Buhari to free Sowore, adding that democracy was being sabotaged in the country.

On his Twitter page, Don Jazzy wrote: “This dangerous precedent of stifling opposition voices and dissenting opinions has survived enough.

“Let’s not pretend our nascent democracy isn’t being sabotaged when citizens shudder at the thought of people they elected into power.

“I plead for Sowore,Free Sowore. It’s really sad to watch. The young man means well for our dear Nigeria. Who is next?”

Adding his voice to the development, Adekunle Gold, described the charges against Sowore as fictional.

On his Twitter page, he wrote, “I really don’t want to believe those fictional charges against Sowore.

“Treasonable what? That must be a joke.”

0 Response to "Celebrities React To Buhari Govt Charges Against Sowore"