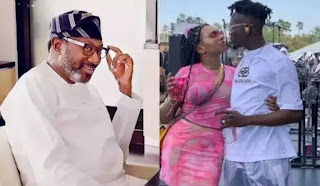 Nigerian Afrobeat superstar Mr Eazi has found himself lucky to have walked into a very welcoming and tolerant family as a prospective son-in-law to his girlfriend’s parents.

Mr. Eazi for the past year and a half, has been dating the daughter of a Nigerian billionaire Femi Otedola and a witty chat of the two sighted by Palitomedia on social media suggests they are buddies already.

Femi Otedola after noticing how his daughter seems to be parading around on social media with Mr Eazi, chopping love all over and flaunting their undying affection for each other has widely opened his eyes with an alert.

Taking to Instagram, the rich Nigerian businessman cautioned the ‘Sample’ you hitmaker to take it slow with his daughter.

The concerned father will do anything it takes to ensure is safe and not hurt physically or emotionally.

Mr. Eazi shared a video of himself with Temi dancing to his song, and Otedola took to the comment section of the said post to beg Eazi to take it easy with his daughter describing her as ‘Angel’.

‘Mr Eazi take it Eazi with my Angel’ he wrote

In response Eazi wrote his popular slang ‘Zaga Dat’ which means’ I copy’. 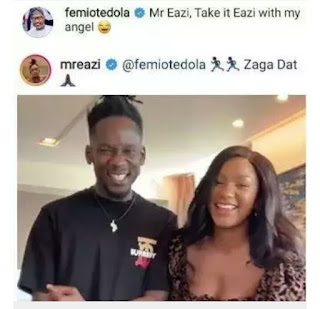 Title : ‘Take It Eazi With My Angel’ – Father Of Mr Eazi’s Girlfriend Otedola Begs
Description : Mr Eazi Nigerian Afrobeat superstar Mr Eazi has found himself lucky to have walked into a very welcoming and tolerant family as a prosp...
Rating : 5