My First Day In Bed With Yvonne Nelson, She Screamed Loud – Iyanya Reveals 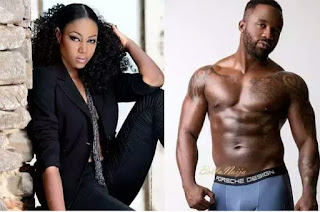 Nigerian singer Iyanya of ‘Your Waist’ and ‘Kukere’ fame has narrated a one-sided story of how actress Yvonne Nelson behaved during their first time in bed when the two were in a love relationship.

The Nigerian singer had said he still misses the Ghanaian actress and filmmaker and explained some of the exact things he misses about Yvonne;

“Like our first day in bed. She was like ‘Oh Yeah baby, I really love it’ and her late night and early morning messages and calls. I miss everything about her…It’s not easy losing a great and beautiful woman like Yvonne. She was everything I have at that moment until I lost her… Life was miserable for me after the break-up but life goes on.”

The news site quoted Iyanya to have explained their break-up, saying, “We broke up because we hardly had time for each other. I was hustling and I would do four shows in a day and I will make two million. So, I won’t say because I was in love with a woman I’m going to see money and I’m going to lay back.”

It is difficult to understand why Iyanya is now fantasizing and reminiscing on fond memories of the very relationship he walked out of several years ago.

Meanwhile, Yvonne Nelson in countless interviews had made it clear she felt Iyannya only used her for his fame and dumped her. She has made it clear their relationship was over for good and returning to the Nigerian singer would be same as “a dog returning to its vomit”.

As far back as 2013, Yvonne Nelson in an interview she granted The Juice had passed her damning verdict on Iyanya.

“I feel it’s very disrespectful talking about him like that but it happened to me he can choose not to talk about it…We were in something (a relationship)…the lies were just too much. I was in town for his birthday and guess what, there were other girls there as well, some from South Africa and some from wherever,” the actress revealed.

Title : My First Day In Bed With Yvonne Nelson, She Screamed Loud – Iyanya Reveals
Description : Nigerian singer Iyanya of ‘Your Waist’ and ‘Kukere’ fame has narrated a one-sided story of how actress Yvonne Nelson behaved during their...
Rating : 5

0 Response to "My First Day In Bed With Yvonne Nelson, She Screamed Loud – Iyanya Reveals"