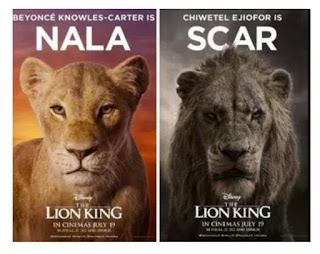 Disney’s ‘The Lion King’ has crossed the billion-dollar mark after less than 3 weeks in theaters.

The live-action remake of the 1994 movie features Beyonce, Donald Glover and Chiwetel Ejiofor in lead roles. The movie joins ‘Avengers: Endgame’, ‘Captain Marvel’ and ‘Aladdin’ as the fourth Disney title to surpass one billion dollars in global ticket sales in 2019.

With its blockbuster slate, Disney has nearly 38 percent of the domestic market share, a cut that increases to more than 40 percent when Fox, which it just purchased, is added.  ‘The Lion King’ earned 361 million dollars at the domestic box office and 638 million dollars overseas.

Outside of North America, it had especially strong showings in China with 115 million dollars, along with the United Kingdom with 48 million dollars and Brazil with 44 million dollars. The movie also stars Billy Eichner and Seth Rogen as Timon and Pumbaa. James Earl Jones reprised his role as Mufasa from the original animated film.

The milestone comes on the heels of another Disney benchmark. Between July 26 and July 28, the company set a new all-time record for global ticket sales for a single studio.  Disney hit 7.67 billion dollars worldwide, smashing the mark it previously set in 2016 with 7.61 billion dollars.

Disney set a new record in 2016 with four films that grossed over 1 billion dollars. In the coming months, Disney will release ‘Frozen 2′, a ‘Maleficent’ sequel and ‘Star Wars: The Rise of Skywalker’.

Title : ‘Lion King’ Makes One Billion Dollars in 3-weeks
Description : Disney’s ‘The Lion King’ has crossed the billion-dollar mark after less than 3 weeks in theaters. The live-action remake of the 1994 mo...
Rating : 5