Kuami Eugene Reveals His Biggest Fear As A Musician 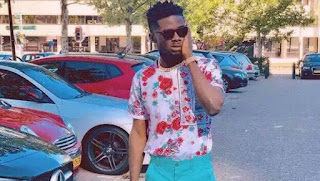 In life, everyone has something that frightens him or that moment he is afraid of.

Whilst some may fear death, some may also fear divorce and also some may have God as their biggest fear.

Popular Ghanaian artiste Kuami Eugene has revealed what scares him the most as far as his music career.

Speaking to A.J Sarpong of Citi Tv, the ‘Walaahi’ hitmaker disclosed that his biggest fear in the music industry is having problems with his record label.

Kuami Eugene who is signed to Lynx Entertainment owned by sound engineer and music producer Richie Mensah made this known on the ‘Hall of Fame’ television show.

“I don’t want to have problems with my record label. Richie is a cool person; He picked me up and I will hate it if one day I can’t call Richie; Something will happen to me”. He espoused.

Kuami Eugene who is popularly nicknamed as ‘Rockstar’ shot to fame when signed to Lynx Entertainment after emerging as a finalist at the Mtn Hitmaker show.

Since his association with Lynx, he has had national success with his music, making hits with every single release he makes.

He joined Mzvee and Kidi and has currently been joined by music duo DopeNation.

Title : Kuami Eugene Reveals His Biggest Fear As A Musician
Description : Kuami Eugene In life, everyone has something that frightens him or that moment he is afraid of. Whilst some may fear death, some may ...
Rating : 5