I Am Used To Being The African Giant - Burna Boy Reveals 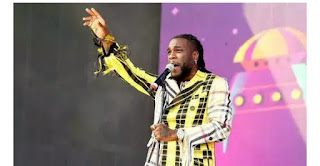 Rave of the moment, Damini Ogulu a.k.a Burna Boy, has revealed that he was on a toilet seat when he was informed he would be performing at the 2019 Coachella Festival.

The Coachella Valley Music and Arts Festival is an annual music and arts festival held at the Empire Polo Club in Indio, California, USA.

The ‘Dangote’ crooner made this known when he featured on ‘The Daily Show’, an American late-night talk and news satire television program hosted by Trevor Noah, South African comedian.

The singer also elucidated on  the controversy that ensued after his name was “written in small fonts” on the lineup for the 2019 Coachella Valley Music and Arts Festival.

Burna Boy said he had condemned the organizers of the event not just for himself as an “African Giant”, but so that other African artistes coming after him wouldn’t have to go through such “denigration”.

“I was on a toilet seat and then My mum calls me and told me we’re doing Coachella. I was like ‘that’s nice!’ I got off and then got on the gram. I checked the lineup. I was looking for my name and couldn’t find it. I was like ‘Am I really performing here?,” he told Noah.

“She then had to circle it for me because the name was so small on the poster. That’s never happened to me before. I’m used to being the African Giant. I didn’t like it. I expressed myself.

“I was like it should be the same thing as all other international artistes that were there. Not just for that but so that those coming after me don’t have to go through that.”

Burna Boy appeared on the show alongside Mark Sanford, a former US representative and ex-governor of South.

Title : I Am Used To Being The African Giant - Burna Boy Reveals
Description : Rave of the moment, Damini Ogulu a.k.a Burna Boy, has revealed that he was on a toilet seat when he was informed he would be performing a...
Rating : 5