BBNaija: Nigerians React To Video Of Mike, Jackye In Bed Together 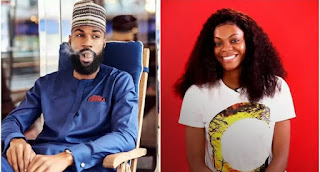 A cross-section of Nigerians have reacted to a romantic moment between Big Brother Naija, BBNaija, housemates, Jackye and Mike.

Jackye who is a close friend with Mike in the house was on Thursday night caught on top of him while he was in bed.

It all happened after the Cruisetopia team lost their Thursday night challenge to the Icons.

Mike who was tired of playing Ludo game in the garden retired to his bed to sleep but Jackye was not happy about it and chased him to his bed.

Jackye’s action has stirred reaction from some BBNaija fans who criticized her for climbing on top a married man’s body while in bed.

Some Nigerians alleged that Jackye in the process of playing with Mike touched his manhood.

@Caramelbsbie “See Jackye wrapping herself around Mike who was wearing just boxers under his robe! Someone’s husband ooo!

@Nwayinmanari “Jackye is in love with Mike, please don’t tell me otherwise. This holding of him in the name of play is too much. ”

@Famousganster1 “I don’t blame Jackye, I don’t blame Mike for not telling her off, it’s only natural.Those hormones will rush out once in a while, but at least, nothing happened at the end of the day.”

@Zenbarbi “Jackye get up from Mike’s body. What kind of rough play is this?

@Chillyanaliyon1 “Jackye followed Mike from dressing room to bedroom. Jackye is taking things too far. From allow to allowance .”

@purityphils “So Jackye is “on the low” shooting her shot at Mike?Yet Mama keeps reminding us of her Boyfriend everyday.

@Adeena_S “Please nobody should come for Jackye alone. “IT TAKES TWO TO TANGO”. Mike is the MARRIED ONE and he should be dragged just as much as JACKYE. Let’s not be unfortunate and stupid!

@Maigidq “So Jackye is dangerously squeezing Mike, somebody’s husband o, what evil is this.”

@B3ttyliciouss “Realizing that Omashola was saying the true about Jackye’s intense love for Mike. GOD HELP US O.”

@MsEveonne “Ike was so uncomfortable in all of this Jackye thing with Mike.”

@Switpat “Can Ebuka just help me ask Jackye what she thinks about Mike? I need her to be put in her place. This too much follow follow is gradually getting outta hand.”

@Rosmar “Jackye has achieved her aim of touching Mike’s blokus this nite! Jackye What kinda play is that, Lying on Mike’s body. Na wa o! Look at his wife don’t joke with yourself.”

@Styletrailer “.Jackye on Mike’s back all in the name of play. Wow this is getting serious,he’s married oh.”

Title : BBNaija: Nigerians React To Video Of Mike, Jackye In Bed Together
Description : A cross-section of Nigerians have reacted to a romantic moment between Big Brother Naija, BBNaija, housemates, Jackye and Mike. Jackye ...
Rating : 5

0 Response to "BBNaija: Nigerians React To Video Of Mike, Jackye In Bed Together"