I Don't Have A Proper Contract With Davido – Peruzzi Reveals 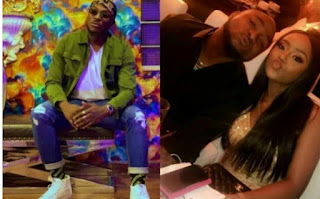 Peruzzi recounted how hard it was for him to believe that his distant cousin Chioma was dating Davido, as he talked about how his relationship with the DMW boss began.

According to the Peruzzi, he first got news of Chioma dating Davido after his mother's burial which was also when he noticed that Davido was always supporting his songs and brand on his social media platform.

He said, “After my mother’s burial; I was going home and someone sent me a message on Twitter, commending my song. The person asked if I remembered her. After she explained who she was, I remembered her. She told me Davido sent my song to her. I didn’t believe it. She further told me that they were dating and she is like my distant cousin, so I didn’t even see it coming.

“I felt like how can she be dating Davido and I wouldn’t know since. She was able to convince me after she sent me some pictures; she told me he was going to be around the next day. She invited me to his welcome party and I went there around 2 am at Club 57.

“Once Davido entered with his entourage, I was scared. He was facing me, but I didn’t know what to do. I moved to see him carefully. He looked at me and called my name. I was happy and I held him. He told me he loved my songs and that I should come to his house. That was the best night of my life. I sent Chioma a text; that I was with him.

“I couldn’t sleep that night because I was too excited. She (Chioma) is my mother’s cousin’s daughter. But she is my cousin; that is how we refer to each other. I don’t have a proper contract with Davido; he is my guy so I am not worried about that. Some people have lived with him for years without any contract.”

On how he felt after he was insulted for wearing Davido’s clothes, Peruzzi told Saturday Beats;

“How would you see something you like and you can’t tell your male friend that you like it? I told him I liked an outfit and he gave it to me. I have come to realise that no matter what I do, people would talk. I don’t let it get to me.”

He also talked about selling his car to buy some drugs for his ailing mother before she died, and completing his degree in medicine and surgery;

“When we realised my mother was diagnosed with cancer; I had to put my car on auction immediately. I wanted to quickly send money to people to help me get the drugs she needed. I could only get the drugs from India but they still didn’t work. I still see myself going back to complete my degree in medicine and surgery but I don’t see myself sitting in the hospital.”

Title : I Don't Have A Proper Contract With Davido – Peruzzi Reveals
Description : Peruzzi recounted how hard it was for him to believe that his distant cousin Chioma was dating Davido, as he talked about how his relatio...
Rating : 5