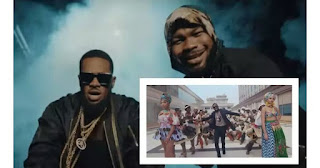 D’Banj has released two singles in the space of one week and the two tracks are off the veteran singer’s forthcoming album.

D’Banj has been rolling out some impressive materials ahead of the arrival of the hotly-anticipated album. The singer’s latest singles, ‘Shy’ and ‘Mo Cover Eh’ featuring street rap sensation, Slimcase.

‘Shy’ is a groovy afro-pop song that displays D’Banj as a shy guy, the video is rich in Igbo cultural values, showing the tradition from a fascinating angle through colourful indigenous attires, dance steps and witty dramatizations.

‘Mo Cover Eh’, which comes in about a week after the former was released, is a street pop single and brings back the memories of D’Banj when he used to be an active harmonica player. Slimcase, however, spiced the song up with his street flavour.

Few weeks ago, D’Banj unveiled a new series, ‘The Adventure of The Koko Master’ on his YouTube channel, the web series is expected to give fans into the singer’s life.

Title : D’Banj Drops Two Singles, ‘Shy’ And ‘Mo Cover Eh’ Off Upcoming Album
Description : D'Banj drops two new videos D’Banj has released two singles in the space of one week and the two tracks are off the veteran singer’...
Rating : 5