Busted: UTME Candidate Arrested For Upgrading Score From 162 To 206 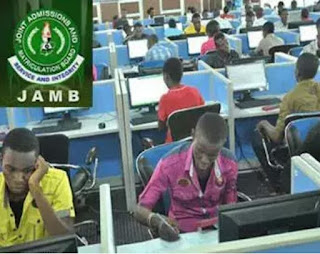 Another 2019 Unified Tertiary Matriculation Examination candidate allegedly involved in faking of result has fallen into the trap of the Joint Admissions and Matriculation Board and nabbed in Abuja.

The suspect, Cletus Kokowa, was arrested on Thursday for allegedly employing fraudsters to upgrade his scores from 162 to 206.

He was arrested at the JAMB headquarters in Bwari, Abuja,  where he confessed that he paid N10,000 to fraudsters for the upgrading.

The board had two weeks ago apprehended three UTME candidates for the same offence and had their results withdrawn and invalidated.

Kokowa with Registration Number 95329290ED from Bayelsa State said he contacted the syndicate through a Whatsapp group a few weeks ago where he was informed that they could upgrade his score from 162.

During interrogation, he disclosed that the fraudsters later sent a fake result screenshot to him, showing that his score was now 206.

It later dawned on him that he was dealing with fake people as he discovered that the result had remained unchanged on the JAMB site.

According to him, his father, Garen Kokowa, had written a letter of complaint to the board asking for correction of his son’s scores.

The father in the letter of complaint addressed to the JAMB Registrar, Prof Is-haq Oloyede, wrote, “Your inability for swift response to address the issue has led to my son’s forfeiture of his Nigerian Defence Academy admission opportunity.

“However, I am craving for your indulgence to quickly rectify the result to enable him to have a good stand for his second choice of institution.”

JAMB Registrar, Oloyede, who vowed that the board would ensure the arrest and prosecution of candidates discovered to have involved in fraudulent practices before, during and after the examination invited Kokowa to come with the two results as proof.

When he was confronted by the board that he was involved in forgery of the result, Kokowa confessed to having employed a syndicate.

He was afterwards handed over to the official of the Nigeria Security and Civil Defence Corps (NSCDC) officers.

Kokowa said, “Those guys sent a mail to me that they could help me to upgrade my score. I then sent them my Registration number and e-mail. When the results were out and I checked, they showed me 206.

“Then, one of them called me asking me to pay them the money.

“I later went to check and I found 162. I was confused. I had heard that upgrading scores was an offence but I didn’t really believe it. I did not tell my daddy and my uncle about the syndicate.”

Title : Busted: UTME Candidate Arrested For Upgrading Score From 162 To 206
Description : Another 2019 Unified Tertiary Matriculation Examination candidate allegedly involved in faking of result has fallen into the trap of the ...
Rating : 5

0 Response to "Busted: UTME Candidate Arrested For Upgrading Score From 162 To 206"