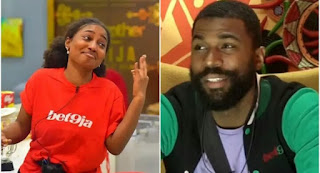 Big brother Naija housemates, Esther and Mike, have named the housemates they feel would make the final five of the game show.

Appearing separately for their diary sessions on Saturday, they gave different reasons why Frodd should be evicted immediately.

While Esther picked herself, SirDee, Mike, Jackie, Nelson as the possible final five, she told Biggy that “Frodd is manipulative” so should be asked to leave.

For Mike; himself, Tacha, SirDee, Jeff, Mercy will make the last five.

He also told Biggy that “Frodd does not listen. He does not take other people’s opinion.”