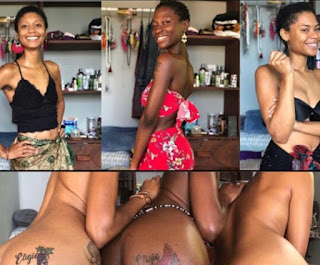 Eligio Bishop, the founder of Carbon Nation, who calls himself Master Chief, has multiple wives. He sometimes divorces old ones and marries new ones. According to the religion he started, men are allowed to have multiple wives and mistresses while the women are supposed to allow it and see themselves as sister wives. The religion also requires its members to shun technology and only feed from the earth. They are also nudists and mostly live as a community in the jungle where they all move about n4ked.

Recently, all the wives of the cult leader got tattoos of him on their butt. The name Eligio was tattooed on all three women's butts with a fruit beside it.

The African American cult leader shared the photos of his three wives' backside and wrote: "All my wives get my name tatted on that ??... gotta do it." 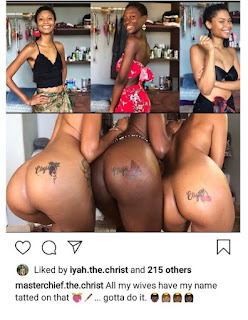