BBNaija Alex Unusual Reveals The kind Of Man She Will Marry 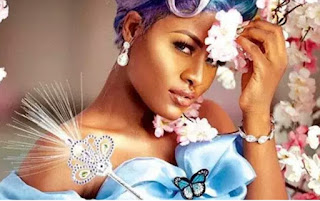 Since she appeared on  Big Brother Naija last year,  Alexandra Asogwa, who is popularly  known as Alex Unusual, has been up  and doing in her chosen fields. The  actress and TV personality who hosted  a two-day children etiquette training in  Lagos recently spoke with reporters on various issues.  Excerpts:

HOW has life been after BBA?

Life has been amazing. Things have changed to a very great extent. I’m always a better version of myself every morning I wake up. I’ve been learning every day. It’s been a rough smooth ride but I’ve been a very good driver, so will definitely get to where I am going.

You seem to have suffered a lot of backlash from people…

Well, whether you are a celebrity or not, you get backlash from people knowingly or unknowingly. It just happened because mine is in people’s faces because this is what people go through every day but if I have to go through all these to set examples and be of good influence to people’s lives,  why not? I can be the sacrificial lamb. I don’t mind. A lot of people are also going through this but I feel like at this point, I’ve seen everything that there is to see. There’s really nothing more that can happen that will shake me so much as at when I came out of the house till now. I am solid and will never fall by God’s grace.

How do you get over things like that and how do you manage such situations?

For me, before Big Brother, I already started to have backlash because in my school, I was popular to a great extent. And whenever you’re popular, a lot of people have opinions about you. So, in school already, they have opinions one way or the other. I think I’ve been used to people having opinions in my life – from my nursery school – because everywhere I go, I am always one of the top, either academically or personality wise. So I’ve been having backlash right from day one, although this one came with a bigger hit.

Of course, it is a sign of greatness because I am a great person. I know a lot of people that were not able to handle this. Maybe just little pressure, the next thing is that the person is found to have committed suicide in the house. So, for anybody that you’ve seen that is able to go through this and still able to come out every morning and smile, they are all great. So, we are all great in our own ways.

A video of you surfaced online where you walked out of the house because of an issue, what really happened?

It was just a point of expressed emotions. That was how I felt at that point and I did what I felt like doing and I later came back. So, if at any point I felt bad and I wanted to walk out, I will.

Sometimes people think stuffs like that are done for publicity stunt…

Well, that still comes back to people having an opinion. Everyone is allowed to have an opinion. I don’t expect myself to be living a life to impress or prove anything to anyone; I live my life the way I deem fit. If they were put in my shoes, they might have handled it a different way but then I am Alex Unusual, I am not them, I am me. So I handle my situations my own way.

You’ve worked so hard to achieve the celebrity status you have now; how have you been able to switch from that unknown girl to the well-known Alex?

I just had to switch from being well known to being extremely known. I have always been known since I was born. Like I said, in my school, everybody talks about Alex, so I’ve been used to it. The main switch I had was having to be on social media and a lot of social media people having their own opinion openly about my life. It wasn’t so much to do. It came unexpected as a hit; that’s why it looked like so much of work for me at first. I felt if I had done this gradually, build it over the years, I wouldn’t have any problems at all but then I had three months to switch from my life of 22 years. But I can say that I did it really well and I am proud of myself.

What has been more shocking to you since you gain stardom?

Hmm … The fact that people still doubt the fact that Alex is Alex. They are like, this is not the real person but I’m like, for crying out loud, you all watched me for three months and I was myself from thebeginning to the end and coming out, I am only learning to be better.

How often do you check your DM (direct messages) on social media?

Yes I do. I check my DMs the much I can because I don’t like it when people say, ‘Oh Alex, I sent you a DM, you couldn’t even reply’ and I’m like, ‘if you are getting two DMs in maybe 5hours, I am getting like 500 in maybe three hours up-to like 1000 in a day’ and it keeps trooping it and I keep trying to keep up.

Do you get advances from men through DM as well?

Well, I don’t ever see it as a serious thing. Once I just open it and I see that you’re not going to say anything sensible, I just move to the next person. So I really don’t even get to read all that senseless talk.

Why do you think such discussion is senseless? Because someday you definitely have to marry?

Well, if you are sensible enough, you should be able to construct it in a way I would stay and read, not when you send me DM and say, ‘Alex I really want to marry you.’ I don’t understand, this is 21st Century and things are not said like that.

But things happen like that sometimes. We’ve seen a lot of it on social media

If it’s supposed to happen, then it will happen.

So, when do you see yourself getting married?

That question is very hard to answer. Do you know why? Before Big Brother, if you asked me, I would have told you at 22years because I want my child to look like my sister and close to Big Brother, I extended it to maybe 24. So, as it is now, I can even just be talking to you and just say six months, you hear Alex is getting married. If I see someone that I’m ready to spend the rest of my life with in the next one day or two days, fine.

Can you marry someone who is not financially buoyant?

It depends. There are some people who have a lot of money now but when you look at their lifestyle, you know that if they continue their life like this, in the next three years, they won’t have anything again or if no one is there for them, they are going to fall. So, if I see someone who is not financially buoyant, I am not going to take his burden into my life and I know that God will not send a burden to me. But I am not saying you should be able to afford all the cars in this world but be okay for yourself, at least you can feed yourself. It is love that matters and not what the person has.

So, love matters more than money?

Yes it does because money will always come and go but love stays.

Title : BBNaija Alex Unusual Reveals The kind Of Man She Will Marry
Description : Since she appeared on  Big Brother Naija last year,  Alexandra Asogwa, who is popularly  known as Alex Unusual, has been up  and doing in...
Rating : 5