Barry Jhay Speaks On How Davido Saved Him From Kizz Daniel 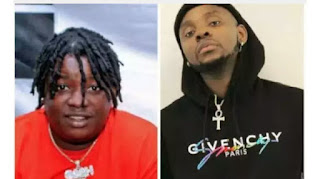 Fast-rising Nigerian singer, Barry Jhay, said that he was the first singer who will ever sign into “Flyboi Record Label” belonging to A-list singer, Kizz Daniel.

He made this known in a radio interview which he had with Dotun of CoolFM.

However, he revealed there was a sour to the taste of the recording deal as Kizz made him signed an illegal deal.

He further revealed he was the one who used his own money to register Kizz Daniel’s record label; Flyboy INC.

Also, he said that the deal which he signed with “Woju” crooner sought to enslave him in the record.

According to him, he was rescued by the DMW boss, Davido.

Barry Jhay who didn’t explain how the singer delivered him, appreciated the “IF” crooner for being a “father figure” to him.

He also revealed that he was supposed to sign to Davido’s DMW but got scared of the competition.

As at the time of filing in this report, Kizz Daniel was yet to say anything about the interview.

Title : Barry Jhay Speaks On How Davido Saved Him From Kizz Daniel
Description : Barry Jhay & Kizz Daniel Fast-rising Nigerian singer, Barry Jhay, said that he was the first singer who will ever sign into “Flyboi...
Rating : 5