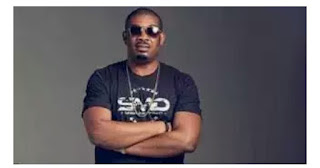 Music mogul, Michael Collins Ajereh a.k.a  Don Jazzy is one of the influential showbiz personalities in Africa.

The Mavin boss who recently announced the expiration of Tiwa Savage’ contract with Mavin Records which was greeted with diverse comments on social media has  revealed why he hasn’t produced a hit song in years.

He made this known during his interview session on Loose Talk Podcast.

The celebrated music producer noted that he has been too busy with other things to the point that he hasn’t had time to produce songs.

“I am too busy with other things to the point my creative level has plateaued. At times, I wonder If I am the one who produced some hit songs back then. The industry has changed, people have more options than they used to in the past. Now, the radio cannot force songs on people. If they like it, they will groove to it, If they don’t there is nothing you can do”.

Speaking further, Don Jazzy spoke about the relationship he had with Tiwa Savage while she was signed on the label.

“Tiwa was more of a partner, we pretty much handled the challenges together”.

The Ajegunle raised entertainer also recounted the challenges of running a record label, stressing that If he has to sign another female artiste, he would need #40 million.

“Have you ever heard that I owe someone? I don’t thief someone’s money. I have over 50 members of staff and I don’t owe them. There is nobody that came to me and left worse than they came”.

Don Jazzy also noted that it takes time for some artistes to catch up after they are signed to a label.

“It takes a lot of time for artistes to catch up after they are signed to a record label and the industry is very competitive”.

Title : Why I Am Yet To Produce A ahit Song- Don Jazzy Reveals
Description : Music mogul, Michael Collins Ajereh a.k.a  Don Jazzy is one of the influential showbiz personalities in Africa. The Mavin boss who rece...
Rating : 5