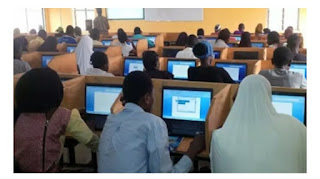 More than a third of the arrests made over examination malpractice in the 2019 Unified Tertiary Matriculation Examination (UTME) was recorded in Bauchi State, a report by the Special Technical Task Team of the Joint Admission and Matriculation Board (JAMB) has revealed.

The document, obtained exclusively by newsmen showed that 48 out of the 136 suspects were arrested in Bauchi during the examination conducted nationwide from April 11 to 19.

Sokoto and Lagos states followed, with five persons each arrested for infractions during the examination.

The document showed that the arrests were made in 23 out of the 36 states.

The task team reported that the legal department of the state police command was vetting the case files of the suspects arrested in Bauchi State to determine the appropriate legal steps to take.

The document shows that three of the five suspects arrested in Sokoto State have been arraigned in court. The two others were granted bail but their sureties were yet to produce them for trial.

In Lagos State, three suspects have been arraigned in court for selling JAMB questions papers. The remaining two arrested in the state were granted bail but were yet to be produced by sureties too.

One suspect was arrested each in Kebbi and Kwara states. The board also arrested suspects for infractions in Gombe, Ekiti, Abia, Delta, Plateau, Oyo and the Federal Capital Territory.

The other states where arrests were made are Borno, Enugu, Adamawa, Rivers, Kaduna, Bayelsa, Edo and Ebonyi.

On Wednesday, the JAMB spokesperson, Fabian Benjamin in phone interview said “about 200” suspects were arrested for examination malpractices during the exercise.

UTME is a computer-based standardised examination organised by the JAMB for prospective undergraduates in Nigeria.

The2019 UTME began on April 11 and ended April 17 with 1.8 million registered candidates.

Palitomedia earlier reported how a man, who claimed to be a professor, Jide Jisus, was caught for alleged examination malpractice.

According to a statement by the spokesperson of JAMB, Fabian Benjamin, Mr Jisus was apprehended by a monitoring team in an examination hall at Brix Academy, Jabi, Abuja.

Apart from Mr Jisus who impersonated a professor, mercenaries, who illegally sat for the examination for their ‘clients’ were also arrested across the country during the examination.

Due to the infractions, the registrar of the board said ”the examination will be well scrutinised before the results are released.”

Some candidates are already appealing to the board to release their results.

Shortly after the conduct of the examination on April 18, JAMB had announced the cancellation of all results in two of its centres in Abia State.

The two affected centres, Heritage and Infinity CBT Centre and Okwyzil Computer Institute Comprehensive School, Ugwunabo, Aba, were summarily suspended and all candidates who sat for the examinations at the centres were reallocated to other nearby centres.

Title : UTME 2019: JAMB Releases Details Of Examination Malpractice
Description : A Computer Based Testing (CBT) centre for the ongoing UTME in Lagos More than a third of the arrests made over examination malpractice ...
Rating : 5