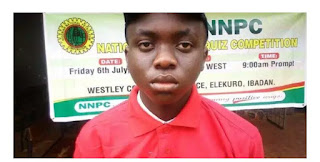 Ekele Franklin, a  15-year-old boy from Imo, who emerged the overall best candidate in the 2019 Unified Tertiary Matriculations Examination (UTME), conducted between April 11 and April 15 has attributed his feat to regular participation in competitions.

The young chap, an SS3 pupil of Meiran Community Secondary School, Meiran, Lagos added that he was shocked to be announced the candidate with the highest score in the examination.

“When I first heard I was the highest, I was a bit shocked.  But I became glad and happy.

“Regular participation in competitions on behalf of Lagos State helped my preparations.” He said.

“The competitions impacted positively on my preparation.  Some of the subjects I did I had done them in preparing for the competitions and met the same thing in the exams,”

Ekene wants to study Chemical Engineering in the university – for the love of it and to impact the society.

“I want to study Chemical Engineering because I feel that chemistry and technology can impact the general public and society in various ways; and personally, I have a flair for chemistry,” he said.