Revealed: Why We Abandon Our Certificates In Varsities –Nigerian Graduates 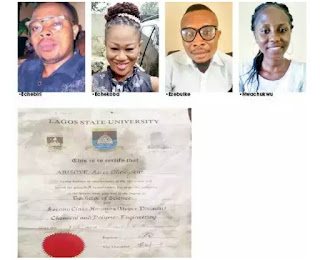 Nigerian employers seem to treat certificates from the nation’s tertiary institutions with disdain or they simply do not fancy the documents.

Rasheed Adeoye, claimed he had put in over a decade of service with the private company, where he works without a certificate to support his claims of having attended a university. “My certificate was not available at the time I was mobilised for the National Youth Service Corps scheme. We were only given statement of results in our school. And at the end of the programme I was retained and I have been working with what I was given. Since my employer does not seem bothered about having to see my certificate, I don’t feel compelled to produce it,” he told Sunday Sun.

Indeed, Adeoye’s employer, Mr Philips Isiegbe, is unperturbed by this development: “Getting a certificate is just an evidence to confirm employees’ academic qualifications, and this to me, pales in significance compared to the competence or proficiency of the candidate. Don’t forget that there are graduates who have the certificates, but who can’t justify it, in terms of performance. So, what matters more to me is an employee’s ability to sufficiently demonstrate the mastery of the tasks given to him or her.”

Like Adeoye, thousands of Nigerians are gainfully employed without their certificates. The development, Sunday Sun gathered, accounts for hundreds of thousands of unclaimed certificates in various tertiary institutions in the country.

The little importance many Nigerians placed on their certificates from tertiary institutions in the country was taken to a ludicrous level recently when the original certificate belonging to one Nigerian graduate identified as Abisoye Azeez Oluwaseun, was found with a barbecue seller in Lagos.

According to information by the Lagos State Traffic Management Authority (LASTMA), the certificate was “about to be used to wrap ‘suya’ (meat barbecue) in Epe.”

The certificate showed that Abisoye graduated with a Second Class (Upper Division) degree in Chemical and Polymer Engineering in 2008. LASTMA announced the discovery of the certificate via a tweet that read: “This original certificate was found at a suya spot and was almost being used to wrap suya in Epe. If you know anybody bearing Abisoye Azeez Oluwaseun, please contact us. Thank you Lagos.”

Although how the certificate got out from its custodian could not be immediately ascertained, not a few analysts opined that the development spoke volumes of the little value attached to certificates from the nation’s tertiary institutions due to myriad of reasons.

Mr Patrick Ezebuike and Miss Judith Nwachukwu are graduates from Delta State University and University of Ibadan respectively. However, almost a decade after graduating, they told Sunday Sun that they were yet to take possession of their certificates from their alma mater.

The duo cited similar reasons for their inability to claim their certificates. Ezebuike, a graduate of Banking and Finance, said: “We were given a simple document that stated at the top: ‘To Whom It May Concern’ after graduation because our certificates were still been processed at the time. But when it was ready, I was told we would have to pay N14,000 or so to get the certificate. That was big money for some of us considering the fact that we were yet to get employed at the time. Some who were lucky to get employed did not see any compelling reason to go for it because their employers who engaged them with the documents they produced in lieu of their original certificates did not put them under any pressure to produce their certificates.”

Similarly, for Nwachukwu, the fee demanded by her alma mater together with the cost and rigours of having to travel to the school she graduated from diminished her desire to claim this essential document. “I so much desire to get it, but when I consider what it will cost me in terms of money and time, because you may not be able to get it in a day, and the money I have to pay to get it processed, I feel constrained to defer it to another time,” she said.

A good number of graduates who abandon their certificates with their alma mater blame it on what they describe as the exploitative tendency and the insensitivity of the institutions they graduated from, to the plight of fresh graduates.

A law graduate from the University of Lagos, who preferred to be anonymous, said that he could not afford to raise N20,000 fee charged by the institution after the convocation. “I was frustrated when I went to my school to collect my certificate and was asked to pay the sum of N20, 000.00 as a fresh graduate who was still seeking employment at the time. I abandoned the certificate and used my ‘To Whom It May Concern’ that was issued to us during our clearance exercise. That is what I have in my file in the office,” he said.

Mrs Joy Uweh who also graduated from the same institution lamented what she described as exorbitant fee charged by authorities of the institution before releasing their certificates. But besides the fee, Uweh said she had no immediate use for the document as of now. “I didn’t bother myself since I have my NYSC discharge certificate. Again I am a business person; I am not looking for any job in the office,” she stated.

For Mrs Vivian Nwabu, there are more encumbrances against the collection of her certificate, more than two decades after her graduation. Although, she also claimed that she had no compelling reasons to head for her alma mater to process her certificate since another document given to her upon graduation still serves the same purpose.

“There hasn’t been need for it. I have been using ‘To whom it may concern” since 1996. I haven’t had an urgent request for it. Apart from that, I was told that one has to present all ones payment receipts before you can get the certificate. I schooled at University of Calabar and I live in Lagos. The distance also is part of it, but mainly there hadn’t been any urgent need to present my original degree certificates.

“I have not collected my degree certificate and my Masters’ degree certificate since 2012. I have been using my statements of result and testimonial.  The kind of work I do, they believe once you have your NYSC discharge certificate and testimonial from your school, you are okay. Before being called up for NYSC, you must have passed your exams and must have done all the clearance before getting the call-up letter that entitles you to participate in the NYSC. But to be honest, I believe my case is that of procrastination.”

The owner of Zhukky Afro Designer, Mrs Azuka Echekoba, who graduated since 1997 said she had not gone back for her certificate since leaving the university. “I can’t remember. I graduated a long time ago. To be sincere, I have even forgotten because I have not gone back to collect the certificate since 1997. Maybe, it’s because I didn’t look for white collar job after school,” she said.

Mr Hillary Izunna, a 2009/2010 Electrical-Electronic Engineering graduate of the Federal University of Technology, Owerri (FUTO), belongs to the class of Nigerian graduates that appear not to be in a hurry to collect their academic certificates years after completing their tertiary education.

According to Izunna, who is now a software developer and computer engineer, the rigorous procedure involved in getting his certificate from his school are one of the reasons that made him lose interest to go and collect it. “I don’t think I need it anymore because the process of getting it was made unnecessarily rigorous by the school authorities”, he told Sunday Sun, adding that “the whole stress makes it seem as if you never even studied there.”

He gave yet another reason: “Then where one graduates with a 2.2 (second class lower) like I did in an engineering programme, it’s places you at huge disadvantage and it would seem you’ve signed a contract with unemployment; almost all job interviewers or employers only seek to employ graduates with 2.1 (second class upper). So why should I bother to go spend my hard-earned money to get a paper that’s useless to me.”

Another graduate who is yet to collect his certificate is Mr Chidi Echebiri, a 2010/ 2011 graduate of Mass Communication at the Federal Polytechnic, Oko, Anambra State. Mr Echebiri who graduated with a fairly good grade- 3:10 (upper credit), cited unemployment and the rigours of getting the certificate from his alma mater as parts of the factors that discouraged him from going for it. “I’ve not collected mine because I don’t think I need it at this moment. My reason is that as long as the statement of result is valid for employment opportunities and for other transactions, then certificate, as it were, is secondary.

“I understand the importance of collecting the document once and for all. But many graduates don’t see the need to go there to apply for it because of certain factors that demoralize graduates to apply for their certificates years after graduation. One of it is traveling the long distance to go get the document and then the unnecessary delays and the bureaucracies faced at schools during collection. Again many of us don’t see it as a necessity for now because of our unemployment status. That too contributes to lack of interest in collecting the document,” he said.

Title : Revealed: Why We Abandon Our Certificates In Varsities –Nigerian Graduates
Description : Nigerian employers seem to treat certificates from the nation’s tertiary institutions with disdain or they simply do not fancy the docume...
Rating : 5

0 Response to "Revealed: Why We Abandon Our Certificates In Varsities –Nigerian Graduates"