Motherhood is a very beautiful but daunting journey and it is no wonder that women who are lucky enough to survive the ordeal try to enjoy the feeling.

Nollywood actress, Funke Akindele, had thousands of fans on social media praising God after she and her husband, Abdulrasheed Bello, welcomed twin babies.

Fans were well aware that the thespian had been trying to have kids of her own and they were happy when it finally came to pass.

Well, no one can claim to be happier than the actress herself and we can deduce as much from her posts on social media. The new mother recently shared photos of herself slaying in a denim outfit.

The cute actress looked casual in a short denim gown paired with grey sneakers with blue laces and a blue bag. Her fringe hairstyle also complemented the look. 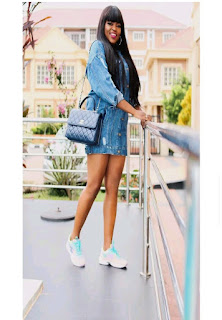 In the caption, Funke disclosed that she wants to look alluring. See her post below:

Funke Akindele and her husband's relationship is gradually becoming one of the most admired celebrity marriages.

The actress recently celebrated him as he clocked a year older. The stunning mother of two called him her king and prayed that their love will last forever.

The adorable couple also released a lovely dance video as they showed off their Zanku (leg work) moves and many fans are thrilled about the kind of love they share.

Title : Mama Twins Funke Akindele Slays In New Photos
Description : Motherhood is a very beautiful but daunting journey and it is no wonder that women who are lucky enough to survive the ordeal try to enjo...
Rating : 5