I Caught My Wife With Three Different Men, Please Separate Us — Man 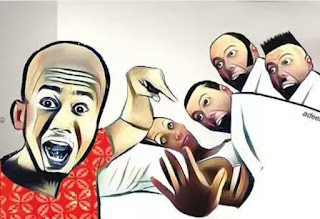 Taiwo had accused his wife of being uncaring and disobedient. He added that she was promiscuous and would soon kill him if he didn’t act fast.

The plaintiff further appealed to the court to grant him custody of their two children because the defendant never had time for them.

Asimiyu admitted to claim but refuted all that the plaintiff had said.

“My lord, I want to end my marriage to my wife today. I’m tired of her and have had enough of her atrocities. If I don’t divorce her she will send me to an early grave and I don’t want to die now, “Taiwo told the court.

“My wife is unhelpful and never ready to give a hand with regards to running the home. She watches as I work round the clock in order that her needs and that of our children are met but feels unperturbed.

“She’s always making demands of me and will even encourage our children in making requests which I consider unreasonable.  She gives the children the impression I have money despite knowing that I labour to make ends meet.

“She has never been supportive of me; she contributes nothing morally or financially towards the running of the home and any time I call her attention to this, she will spite me by telling me the responsibility of looking after the home is mine as the head, “he added.

“She cares less about our children’s welfare. Despite my efforts at ensuring there’s food in the home, she hardly cooks and when she does it’s tasteless. She’s also not interested in their appearance. When other children appear neat and presentable, ours look dirty and shabby. I have constantly shown my displeasure at this but my wife obviously is not bothered.

“I warned her to desist from coming home late but she has turned a deaf ear to me. She has no time for our children because she’s never at home.

“My lord, worst of it all is that my wife is adulterous. I’ve caught her thrice with three different men. She pleaded that I forgave her the first time but failed to change. If I continue to live with her, she will send me to an early grave.

“I, therefore, pray the court to separate us and hand over our children to me, ”he stated.

“I’m also no more interested in our marriage, Asimiyu told the court.

“I trek miles every day hawking goods to keep the home going but all I get in return are complaints because he’s never appreciative of my efforts.

“My lord, all that he said are lies. I spent my profits and almost all my capital taking care of him and our children but he still has the guts to say I’m not caring.

“I want the court to ask him when last he gave me and the children feeding allowance or provided us with new clothes. I have solely borne the responsibility of training our children in school.

“I’m not adulterous as he stated, he’s just trying to paint me black before the court. The men he’s referring to are my customers and nothing more.

“He never ceased to beat me and will soon maim me if I don’t leave him. He has since moved all my belongings into the sitting room where I now sleep, “she concluded.

Giving his judgment, the court president, Chief Ademola Odunade stated that since the duo is in support of divorce the court had no option than to separate them.

Ruling, Odunade declared their union dissolved and granted custody of their two children to the defendant.

He ordered the plaintiff to give the defendant N3, 000 to pack her belongings from his house.

0 Response to "I Caught My Wife With Three Different Men, Please Separate Us — Man"