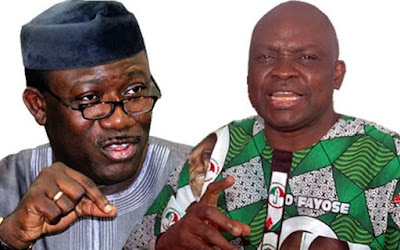 The All Progressives Congress governorship candidate in Ekiti, Dr. Kayode Fayemi, has said Governor Ayodele Fayose will not be allowed to move about on the election day of July 14.

He assured the people of adequate security on the day, urging them to come out en-mass to perform their civic duties.

According to him, Fayose will only be allowed to vote and go back to his house in Afao-Ekiti.

He said, “We will ensure adequate security for voters on election day because if you are not well protected, the election will not be free, fair, credible, transparent, genuine and acceptable.

“Fayose cannot threaten or intimidate anybody on the day of the election. Fayose will only be allowed to cast his vote and he will go back to his house in Afao.”

Fayemi spoke on Thursday while on a campaign tour to communities in the Ido/Osi Local Government Area.

The APC candidate said Fayose, the Peoples Democratic Party, and its candidate, Prof. Kolapo Olusola, had nothing to showcase in the communities (visited) in the last three-and-half years.

Title : Fayose Will Only Vote And Return To His House On Election Day —Fayemi
Description : The All Progressives Congress governorship candidate in Ekiti, Dr. Kayode Fayemi, has said Governor Ayodele Fayose will not be allowed to...
Rating : 5