Hannah Osazuwa was not in the right frame of mind. Perhaps her temper got the better of her or did she actually overreact?

Neighbors had always suspected that she drank too much and might be taking other spiky substances.

Her violent streak had finally brought Seun Akintoye’s life to a halt with one swing of the scissors.

It happened so fast, Seun was still in a state of shock when he pulled the scissors out of his chest and fell to the ground.

Screams of both their friends who were present when it happened brought the neighbors rushing in.

The first respondents remember seeing Seun gasping for air in a pool of his own blood.

All these happened on October 16, just 3 days after her birthday. 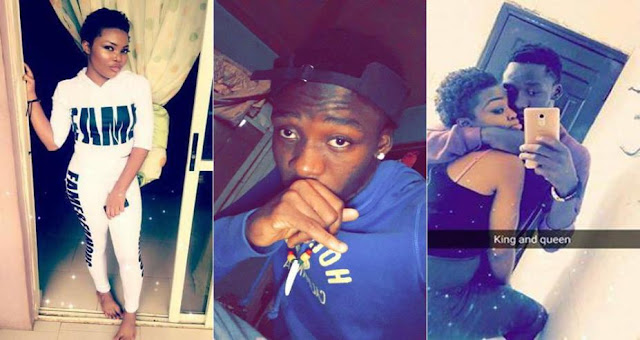 Hannah and Seun Akintoye were in love and they did not care about what other people had to say. They thought they knew each other well enough.

Their relationship has been described as toxic and its lethal nature seemed to be what kept them together, but it finally drove them apart.

Hannah lived in one of the popular Face-Me-I-Face-You buildings located inside Gowon Estate in Egbeda.

Her single room was all she could afford and she lived alone. Seun was a regular visitor – everyone knew him as Oko Hannah.

The Amebos in the compound peddled the rumour that she had been disowned by her parents because of her wayward lifestyle.

A source, whose shop is attached to the building where the sad event occurred told said:

“After we rushed into the room and saw blood on the floor, we used clothes in the house to soak the blood that was coming out of his body, before trying to rush him to a hospital inside the Gowon Estate.

Another source told Bounce News that when the police from the Gowon Estate station came to carry her away, she seemed to be in shock.

She may not have realised what had just happened. The source says she may have been motivated by an overdose of alcohol or banned substances she may have sniffed earlier that day.

Witnesses said a day before his death, Hannah got into the ‘usual’ argument with Seun, whom she stabbed on the leg with a knife.

If the warnings of his friends were not enough to make him end his relationship with her, the pain he must have felt from the wound on his leg should have alerted him of impending danger.

The scissors that became the weapon of death was part of the requirements that she was asked to bring along for her sewing classes.

A source said that when he came with his friend to see her that faithful day, she was intoxicated as early as 8am.

Seun was upset by her appearance and told her how embarrassed he felt that she was so unstable even before sunrise.

An argument broke out. Seun tried to pull her into the room and make her calm but she rushed in and grabbed a scissors with which she attacked him.

The Amebos in the compound also claim that Hannah was linked to the accidental death of another deceased person even before she met Seun.

She allegedly escaped the long arm of the law because her father is a senior officer in one of the country’s security outfits.

The Lagos state Police Public Relations Officer (PPRO), ASP Olarinde Famous-Cole said that Hannah’s case was still under investigation at the homicide section of the State Criminal Investigation and Intelligence Department in Yaba.

Seun’s love came at a cost. Two days before he died he wrote on Facebook ‘Sometimes a man needs to die to live again’.

Title : New Update On The 17year Old Girl Hannah Osazuwa Who Stabbed Her Boyfriend To Death In Lagos
Description : 20-year-old Seun Akintoye’s love for 17-year-old Hannah Osazuwa may have cost him his life after he failed to read the writing on the proph...
Rating : 5