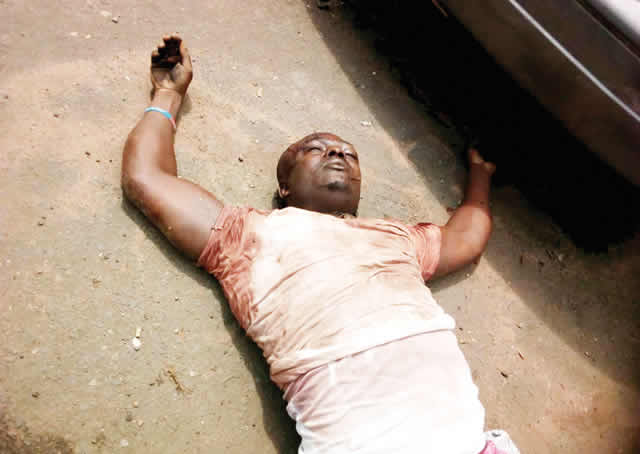 According to report by The Punch, There was jubilation at the Imo State Police Command headquarters in Owerri when the remains of the state’s ‘most-wanted’ armed robber, Ihechi Nwankwo, were brought from Umuahia, the Abia State capital.
The spokesman for the Imo State Police Command, Andrew Enwerem, told Southern City News that the 27-year-old armed robber, who hailed from Amaumara in the Ezinihitte Mbaise Local Government Area of the state, had been on the wanted list of the command for a long time.
According to Enwerem, Nwankwo had been involved in a series of criminal operations, including robbing a bank customer of N8m at Access Bank at Ahiara Junction on August 8.
The slain suspect was also said to have robbed one Jovita Enwerem of N650,000 at gunpoint at Ahiara Junction on June 21.
A police source, who did not want to be named, told our correspondent that Nwankwo met his waterloo after he masterminded a robbery attack on a Chinese expatriate in Owerri in May.
The expatriate was said to have been dispossessed of his N10m, while his police guard was killed in the criminal operation.
Enwerem said, “On September 28, the state police command control room was alerted to a robbery attack along Wetheral Road, Owerri.
“A customer of the Wetheral Road branch of Zenith Bank had gone to the bank to withdraw N50m. On their way, along Wetheral Road, they were confronted by a daredevil armed robbery gang operating with a grey colour Toyota Corolla with number plate ABJ 951AA that blocked the convoy and immediately opened fire on the police escorts.”
The police spokesman stated that the robbers engaged the cops in a gun duel but they were overpowered by the police.
He said three policemen, however, sustained gunshot injuries and were already being treated in the hospital.
Enwerem said, “The criminals escaped from the robbery scene but their vehicle was riddled with bullets. We, however, contacted police in the neighbouring states to be on the lookout.
“Subsequently, the criminals were intercepted in Umuahia, Abia State, where they engaged the operatives in a gun duel. One of the gang members was gunned down while the others escaped with bullet injuries and the ash coloured Toyota Corolla car was also recovered.”
Enwerem said investigation by the command’s Special Anti-Robbery Squad operatives revealed that the elder brother of the slain robber, one Chibuike Nwankwo, 42, and Chukwudi Obinwanne, a native of Ugiri in Isiala Mbano LGA of the state, were being held at SARS cell for bank robbery cases.
The two suspects in the police custody, however, denied the allegation when our correspondent sought to know their level of involvement in the crimes.
NOTE:- if you are having problems downloading via your android device, hold on the download button and select "SAVE LINK" Or use another phone browser, for problems downloading via PC/Laptop simply right click the download button and select "SAVE LINK AS".

Title : ‘Great Jubilation’ As Police Kill Most-wanted Imo Robber (Photo)
Description : According to report by The Punch, There was jubilation at the Imo State Police Command headquarters in Owerri when the remains of the state...
Rating : 5