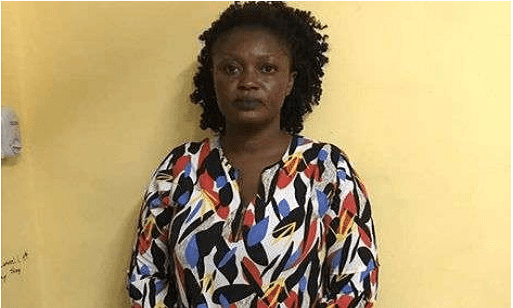 The Criminal Investigations Department (CID) of the Ghana Police Service has arrested an alleged notorious car fraudster it has been on a manhunt for over the past nine months. Bridget Enchill Obeng’s arrest follows reports that she allegedly hoodwinked over 10 unsuspecting people under the pretext of selling vehicles to them.
The suspect, who also goes by the name Naana, was apprehended at Baah Yard, Awoshie, Accra, after reportedly playing hide-and-seek with the police over the period.
The police earlier arrested a different person they had suspect and later realised it was a mistaken identity.
However, upon a tip-off, Enchill was later busted by the Osu police in another case and handed over to the CID for investigation.
The Police service has revealed that the Tesano, Adabraka, Teshie and Airport police are also investigating her for fraud.
The CID’s Director of operations at the headquarters, ACP Peter Gyimah, told DAILY GUIDE that, Enchill Obeng, who operated with the name Naana, displays various vehicles for sale with her contact numbers on them.
He said when interested persons contact her, she then arranges to either meet them or asks her accomplices to do so and in the process, takes from prospective buyers monies ranging from GH¢9,000 to GH¢50,000 and goes into hiding.
Modus Operandi
According to ACP Gyimah, the suspect takes the buyers to other persons she claims are the real owners of the vehicles. A
After the money has been paid, Enchill and her accomplices then present the victims with fake car keys and documents and asks them to go for the vehicles.
The victims get the shock of their lives when they go to the locations only to neither meet any car nor person.
Police investigations have revealed that the suspect and her accomplices often use apartments with owners outside the country or hospitals for their nefarious activities.
Six of the victims of Enchill Obeng told the police that their monies were collected at the Korle-Bu Teaching, 37 Military and the Ridge Hospitals.
NOTE:- if you are having problems downloading via your android device, hold on the download button and select "SAVE LINK" Or use another phone browser, for problems downloading via PC/Laptop simply right click the download button and select "SAVE LINK AS".

Title : Female Notorious Fraudster Finally Arrested After Manhunt For 9 Months (Photo)
Description : The Criminal Investigations Department (CID) of the Ghana Police Service has arrested an alleged notorious car fraudster it has been on a m...
Rating : 5