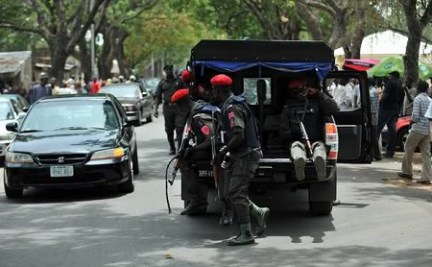 Tension has taken over an Abia State community as members of the Indigenous People of Biafra clash heavily with soldiers.
The Abia State capital of Umuahia was Monday night thrown into unrest as members of the Indigenous People of Biafra (IPOB) were reported to have engaged soldiers at the capital in a bloody battle.
The incident which was said to have occurred at the popular Isi Gate spilled to other parts of the state capital, causing tension amongst residents and visitors alike.
According to The Nation, sources in Umuahia, who spoke on the matter said that the situation forced many business owners and traders within the city center to abruptly close their shops over fear of arrest or being caught up in the crisis which has literally shut the city down.
While information about the report remains sketchy, a version of the incident has it that some soldiers stationed at Isi Gate were collecting money from commercial tricycle operators and when one of the operators refused giving them money , one of the soldiers slapped the commercial tricyclist.
The situation degenerated into a fight when members of the union in solidarity with their member engaged the soldiers in a brawl.
Another version of the incident claimed that the soldiers at a checkpoint around Isi Gate stopped a commercial tricycle operator and demanded that the driver should hand over to him the Biafra and IPOB insigma in his tricycle, but the driver refused.
The situation, it was learnt degenerated into a heated argument which attracted crowd and the soldiers on seeing that the area was already charged, shot into the air to scare people, but the crowd overpowered them and injured some of them in the process.
At the time of filing this report, it was gathered security agencies have flooded the state capital with their men on the alert to prevent total breakdown of law in the city.
A source at the Aba Area Command told our reporter that their men have been properly briefed to be on alert at some of the flash points in the commercial city and be vigilant of movement of persons who may wish to stir up the peace of the town.
The Coordinator of IPOB in the State, Mr. Ikechukwu Ugwuoha said that he was yet to be properly briefed about the incident.
But a member of IPOB who would not want his name in print told our reporter that the soldiers shot at and injured some of the people who had remained peaceful and were appealing to the soldiers to release the tricyclist to go about his business since they couldn’t find anything incriminating on him.
The 14Brigade Ohafia Public Relations Officer, Major Oyegoke Gbadamosi disclosed that some of soldiers were injured and were in an undisclosed hospital where they were receiving medical attention.
He denied that the soldiers fueled the crisis, alleging that their operational vehicle was damaged by the crowd.
Gbadamosi who said he was yet to get the full information to the incident, promised to get back to the reporter as soon as he is briefed on the matter and gets clearance from his boss (Brigade Commander).
In a text message sent to our reporter, the State Commissioner of Police, CP Adeleye Oyebade said “We are on top of the situation. We will contain the situation. There is no cause for alarm. All hands are on deck to co continually sustain the peaceful atmosphere we have labouredly tirelessly to achieve so far in the state.”
NOTE:- if you are having problems downloading via your android device, hold on the download button and select "SAVE LINK" Or use another phone browser, for problems downloading via PC/Laptop simply right click the download button and select "SAVE LINK AS".