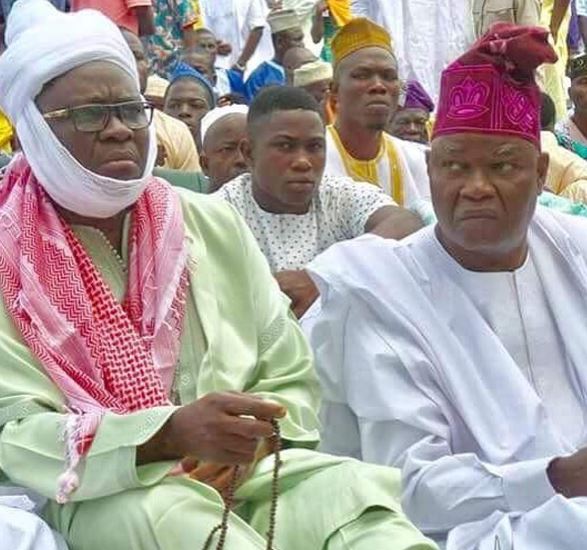 Alhaji Akintola, President of the Muslim Rights Concern (MURIC) has described as sinful, the act of Ekiti state governor, Ayo Fayose a Christian, wearing the Muslim regalia to the Eid ground for the Sallah prayers on Friday, September 1, 2017.
Akintola released a statement condemning Fayose for using the religious gathering to deliver a political speech which according to him is an “executive hocus pocus, highly sacrilegious and unduly provocative. It is Act I, Scene I in the Theater of the Absurd.”
Akintola said Fayose came to the Eid ground to campaign for the next person who would take over his office. He added that electorates now have to demand a psychiatric test to be conducted on those that wish to assume political office.
His statement in partly reads:
“He has delivered several anti-Muslim speeches. His general attitude and body language to Muslims of Ekiti belie his status as the state governor. He has also demolished mosques out of sheer desire to eliminate all Islamic landmarks from Ekiti. So who is Fayose deceiving? The fact that he offered advice concerning who Muslims should vote for in the coming Ekiti 2018 election in his speech at the Id ground reveals Fayose’s real motive. But that is his undoing’.
‘Delivering a political speech in a serene atmosphere and on a sacred ground is sacrilegious. Fayose has also politicized religion. Who are Fayose’s advisers for Allah’s sake? Or is it that he does not listen to them? It is most likely that he doesn’t listen to anyone. Like every bully, Fayose acts on instinct. He tries to think later though. Fayose has abused the turban and arrogantly violated Islamic wardrobe etiquette. It is an insult for him to have so boldly dressed himself up like an Imam on Id ground. Only a titled Muslim leader or an Islamic scholar can dress like that. Fayose has failed to respect a major Islamic decorum’.
‘Can any political leader put on a pastor’s cassock and clerical collar without causing uproar? Fayose has shown that he has no respect for Muslims or their religion. He derides Ekiti Muslims yet he tries to con them to vote for his party. On a final and very serious note, we suggest that in view of our experience in the Third Republic, it has become necessary, from now onward, for the electorate to demand certificate of psychiatric examination from candidates seeking political offices.”
NOTE:- if you are having problems downloading via your android device, hold on the download button and select "SAVE LINK" Or use another phone browser, for problems downloading via PC/Laptop simply right click the download button and select "SAVE LINK AS".