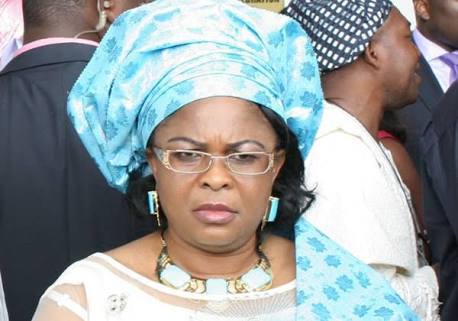 The Economic and Financial Crimes Commission has reportedly uncovered an uncompleted eight-storey building allegedly belonging to Patience Jonathan, the wife of former President Goodluck Jonathan in Abuja.
The magnificent edifice, located within the Central Business District, is between the National Mosque and the Federal Secretariat, Punch reports.
The ex-First Lady allegedly acquired the property through her foundation known as Aribawa Aurera Reach Out Foundation.
In a document, which has been attached to a court application, the anti-graft agency said it had written to the Corporate Affairs Commission to get the identities of the directors of the foundation who are believed to be fronts for Patience.
The anti-graft agency has also written eight banks: Skye Bank, Fidelity Bank, First Bank, Union Bank, Guaranty Trust Bank, Zenith Bank, United Bank for Africa and Unity Bank.
The document read, “Plot 1350 Cadastral Zone A00 CBD which was allocated to Ariwabai Aurera Reach Out Foundation in 2010 and Certificate of Occupancy issued in 2011. The plot bears an eight-storey building still under construction.
“Inference may be drawn from investigation that the suspect’s (Patience) last known official position was permanent secretary in Bayelsa State. Hence, there is no way such magnificent architectural edifices could have been built within a short space of time.
“There is a high probability that it could have been built with the proceeds of crime. It is evidently clear that it is a case of money laundering but there is a need to do more investigation.”
“In view of the foregoing, I request for an interim forfeiture order on the two properties amongst others linked to the suspect and believed to have been acquired from the proceeds of crime.
“This is particularly very important because attempts to mark the properties were resisted and even the portion that was successfully marked was later cleaned off by the agents of the suspect.”
NOTE:- if you are having problems downloading via your android device, hold on the download button and select "SAVE LINK" Or use another phone browser, for problems downloading via PC/Laptop simply right click the download button and select "SAVE LINK AS".