Messi is the Best I Have Ever Seen – Guardiola 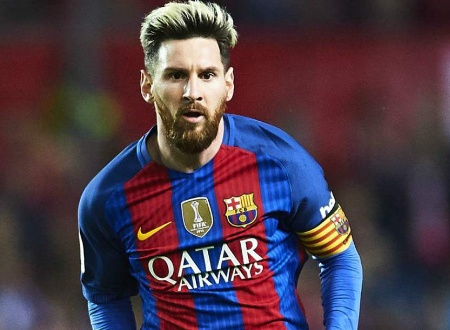 Pep Guardiola has described Lionel Messi as “the best player I have ever seen” , with the Barcelona star making the game look “simple”.
The now Manchester City manager spent four years working with the mercurial Argentine at Camp Nou between 2008 and 2012.
They collected an enviable haul of major honours together, with Guardiola the tactical mastermind and Messi the on-field inspiration.
In spite of those successes, and many more which have followed, the debate lingers on regarding who is the finest player on the planet, with Real Madrid talisman Cristiano Ronaldo part of any discussion.
Guardiola, though, is no doubt as to who he prefers, telling L’Esportiu on Messi: “He is the best player I have ever seen.
“The best thing about him is not what he does but how simple he makes everything look.
“He is not just the best player because he can dribble past three or four players, it is because he does it better than anyone in the world.”
Guardiola has also had his say on the end of another productive era at Camp Nou, with Luis Enrique having vacated Barca’s managerial post after three years at the helm.
His final campaign saw Real wrestle the Liga title away from Catalonia, while also claiming the Champions League crown, but Guardiola believes Enrique has left solid foundations in place for successor Ernesto Valverde to build on.
He added: "I see Barca a lot better than how they see it in Barcelona.
“Luis Enrique’s work has been excellent. With him, when they were playing well, they were almost unbeatable.
“They have played very good football, while Messi is still doing it, and I do not think that the players who have signed are bad players.”
NOTE:- if you are having problems downloading via your android device, hold on the download button and select "SAVE LINK" Or use another phone browser, for problems downloading via PC/Laptop simply right click the download button and select "SAVE LINK AS".

Title : Messi is the Best I Have Ever Seen – Guardiola
Description : Pep Guardiola has described Lionel Messi as “the best player I have ever seen” , with the Barcelona star making the game look “simple”. Th...
Rating : 5