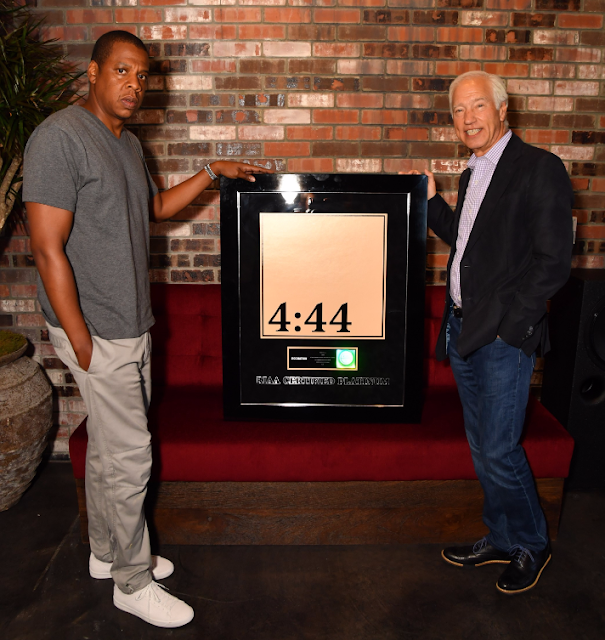 He’s done it again. Jay Z released his thirteenth studio album 4:44 last week to an amazing response from fans and critics. Just six days later, the album has been certified platinum by the Recording Industry Association of America (RIAA), recognizing 1 million albums sold and/or streamed in the United States.
“Props to JAY, he’s done it again! Another Platinum album adds to an already iconic career,” said the very white and not particualrly hip RIAA chief Cary Sherman pictured above with not particularly happy Jay-Z.
The award is particularly impressive since the album is currently only available to existing TIDAL and Sprint customers. 4:44 is expected to hit other streaming services and retailers, including those selling physical CDs, starting July 7th.
This makes his 13th consecutive platinum LP release, a run that began with 1996’s Reasonable Doubt . His biggest-selling album to date, according to the RIAA, is Vol. 2… Hard Knock Life , which was certified 5x platinum. JAY-Z also has four additional Platinum Album Awards for collaborations with Kanye West, Linkin Park, and R. Kelly.
NOTE:- if you are having problems downloading via your android device, hold on the download button and select "SAVE LINK" Or use another phone browser, for problems downloading via PC/Laptop simply right click the download button and select "SAVE LINK AS".

0 Response to "JAY-Z’s “4:44” Album Reaches Platinum Status Less Than A Week After Release"