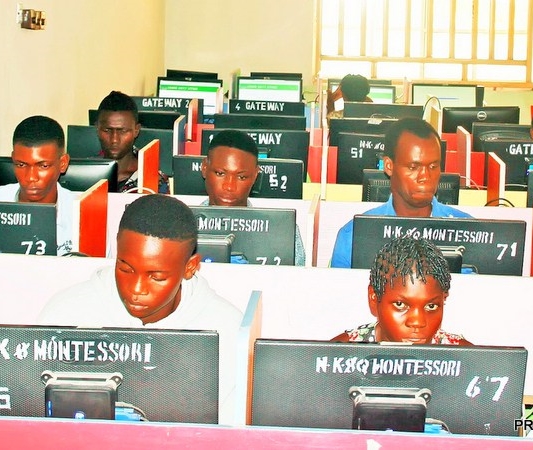 While speaking in an interview in Abuja on Monday, JAMB’s Head of Public Relations, disclosed when JAMB will begin the sale of the 2017 Direct Entry forms and registration of foreign candidates.
Candidates for JAMB UTME Computer Based Text writing their exam at a centre in Yenagoa, Bayelsa State (NAN)
The Joint Admission and Matriculation Board (JAMB) will begin the sale of the 2017 Direct Entry forms and registration of foreign candidates on July 10.
JAMB’s Head of Public Relations, Fabian Benjamin, made this known in an interview with the News Agency of Nigeria (NAN) in Bwari, FCT, on Monday.
Mr. Benjamin said the process of registration for the Direct Entry was spelt out in the just concluded Unified Tertiary Matriculation Examination (UTME).
He said candidates for Direct Entry were expected to have Advanced Level, Diploma or its equivalent, while foreign candidates must possess proof of residency abroad.
“For the foreign candidates to be eligible to write examination in a foreign centre, you must have stayed in the foreign country for at least a minimum of six months.
“You must have schooled there, you must have had your secondary education there; you must show evidence of having stayed there for period of six months.
“If you have stayed in Nigeria and just fly to London to register, you are not eligible; you must have schooled or had your secondary education outside the country.
“Not that you just finished Senior Secondary Certificate Examination in 2016, and you are rushing to the United Kingdom to go and write your examination,” Mr. Benjamin said.
He noted that measures had been put in place to ensure that candidates who wrote the previous examination and failed were not registered in foreign countries, unless they meet the guideline.
Mr. Benjamin explained that the Direct Entry would be sold at the same price previously pegged at N5,000, adding that the Board was yet to fix the price for application for foreign candidates.
“We are discussing on that, we are looking at selling the forms at $100 (N31,525.00) for Africans and $150 (N47,287.50) for non-Africans,” he said.
He said that the JAMB Direct Entry was mainly for people who already possessed a diploma certificate and wished to do a programme in the university.

Title : JAMB Announces Date for Sales of 2017 Direct Entry, Foreign Candidates’ Forms
Description : While speaking in an interview in Abuja on Monday, JAMB’s Head of Public Relations, disclosed when JAMB will begin the sale of the 2017 Dir...
Rating : 5