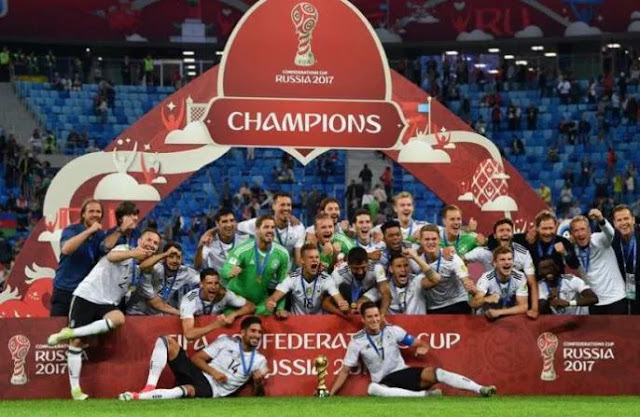 Germany defeated Chile 1-0 on Sunday to win their first
FIFA Confederations Cup trophy.
Reigning world champions Germany have now become the number one team in the world after the win against Chile in St’ Petersburg, Russia.
Chile started the game like a runaway train with chance after chance went begging.
However, a costly mistake by Marcelo Diaz saw Lars Stindl put Germany ahead.
The goal served as impetus for the Germans to assert their dominance on the game. They should have gone into the break 2-0 but chances from Julian Draxler and Joshua Kimmich failed to amount to much.
Chile came back to life in the last 20 minutes of the game but the late rally was not sufficient to overcome the Germans.
Germany is now the second European country after France to win the Confederations Cup trophy.
NOTE:- if you are having problems downloading via your android device, hold on the download button and select "SAVE LINK" Or use another phone browser, for problems downloading via PC/Laptop simply right click the download button and select "SAVE LINK AS".