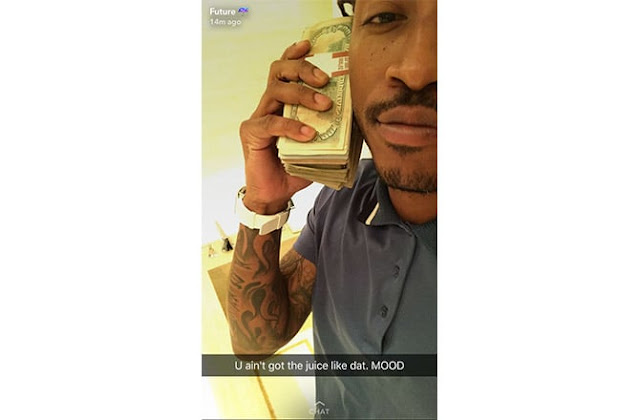 Following the release of JAY-Z’s 4:44 album this past Friday, many people believed Jay had some choice words for the Future, particularly on the intro track “Kill Jay Z” where Hov subtitly dissed Future for losing Ciara to Russell Wilson… “In the future, other N!ggas playin’ football with your son/You had lost it, 13 bottles of Ace of Spade what it did to Boston.”
Hours ago, Future hopped on Snapchat and seemingly threw a quick jab back and Hov. However, he did not respond to the above-mentioned line, at least not directly. It actually was the money phone line that got Future’s attention.
On album track “The Story of O.J,” JAY-Z hits out at rappers who pose with stacks of money next to their ears. “You’re on the Gram holding money to your ear, there’s a disconnect, we don’t call that money over here”, he is heard to say.
Future appeared on Snapchat and shared a selfie of him holding a stack of money to his ear. He captioned the pic simply read “U ain’t got the juice like dat. MOOD.”
On a related note, Boosie Badazz also addressed the same line. He recently claimed Hov is not as influential in the South as he believes and that this line won’t stop anyone from doing the money phone.
NOTE:- if you are having problems downloading via your android device, hold on the download button and select "SAVE LINK" Or use another phone browser, for problems downloading via PC/Laptop simply right click the download button and select "SAVE LINK AS".

Title : Future Responds To JAY-Z’s “4:44” Jabs
Description : Following the release of JAY-Z’s 4:44 album this past Friday, many people believed Jay had some choice words for the Future, particularly o...
Rating : 5