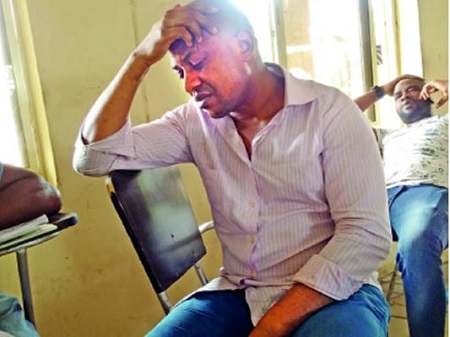 The lawyer who is meant to represent the suspected billionaire kidnapper, Evans’ in court, has lost a case.
Olukoya Ogungbeje, the lawyer standing for kidnap kingpin, Chukwudumeme Onwuamadike, aka Evans, has lost yet another case in court.
According to NewsMakers, Olukoya Ogungbeje, was defeated on Friday, when Justice Ibrahim Buba of the Federal High Court in Lagos dismissed two fundamental rights applications filed by him.
Ogungbeje had reportedly filed the case on behalf of his clients, Messrs Chief Kenneth Chukwuemeka Ajoku and Chidinma Ozurumba, against the Economic and Financial Crimes Commission, but it was dismissed for lack of merit and for being frivolous.
The judge also awarded a total cost of N500,000 against the two petitioners.
Other respondents in Ajoku’s suit are a Lagos-based lawyer, Mr. Taiwo Kupolati, Folorunsho Sholanke, Jide Olaleye, Abraham Ogunleye, Kolade Akinwunmi and Dr. Ishaku Danladi Msheliza.
The two petitioners, in suits marked FHC/L/CS/736/2017 and FHC/L/CS 803/2017, had urged the court to declare that the arrest and detention by the operatives and agents of EFCC on May 4, at the instigation of other respondents for taking up the brief of his client and without cause, was “illegal, wrongful, unlawful, and unconstitutional as it violates the applicant’s fundamental rights as guaranteed under sections 33, 34, 35 and 36 of the 1999 Constitution of the Federal Republic of Nigeria.”
Responding to the suits, the EFCC, in two separate counter-affidavits deposed to by Ayodele Samuel and Makinde Adebayo, and argued before the court by Banjo James, urged the judge to refuse the applicants’ applications for being frivolous and lacking in merit.
Delivering judgment on the two applications on Friday, Justice Buba, while dismissing the two applications for lacking in merit and being frivolous, awarded a total cost of N500,000 against the two applicants in favour of the EFCC and other respondents.
Two weeks ago, Ogungbeje filed such fundamental rights suit against police authorities in a bid to set Evans free, claiming that the police illegally detained the suspect who had made a series of televised confessions on how he had kidnapped his victims and kept them for as long as seven months until their families coughed out as much as $1m.
A victim’s son had revealed that his 86-year-old father was killed by Evans and his gang after he had paid a huge ransom.
NOTE:- if you are having problems downloading via your android device, hold on the download button and select "SAVE LINK" Or use another phone browser, for problems downloading via PC/Laptop simply right click the download button and select "SAVE LINK AS".