It was sad morning in Ikorodu on Tuesday, as many people are feared dead when a Dangote truck carrying bags of cement crashed into a BRT bus in Ikorodu, Lagos.
It was gathered that the truck driver which was fully loaded lost control and veered off its lane to collide with the BRT bus.
An officer of the Lagos Neighbourhood Corps (LNSC) confirmed the incident to THE IMPACT on phone. 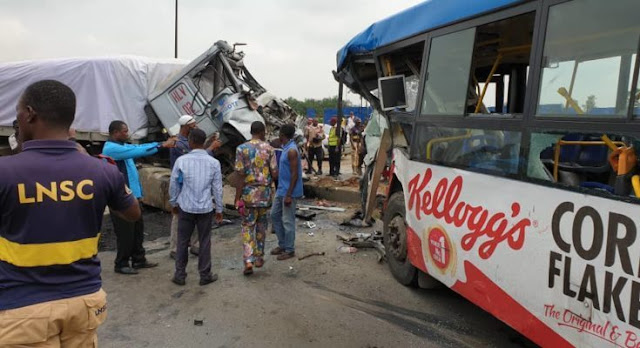 The Lagos State Traffic Management Authority (LASTMA) on its official Twitter handle @followlastma, also confirmed the incident, “A fatal accident involving a loaded trailer going inward Ikorodu that skidded off the main carriageway to collide with a high capacity bus on the BRT corridor.”
We gathered that victims of the fatal accident were taken to the hospital

Title : Many Feared Dead As Dangote Truck Collide BRT Bus In Ikorodu (Photos)
Description : Affected BRT bus It was sad morning in Ikorodu on Tuesday, as many people are feared dead when a Dangote truck carrying bags of ce...
Rating : 5