Strike: We Don’t Have Agreement With FG - ASUU 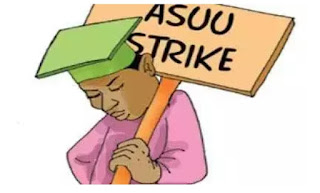 The Academic Staff Union of Universities (ASUU) has reacted to the claim by the federal government that an agreement was in place saying this was not true.

Nigerian Tribune reports that Prof Biodun Ogunyemi who is the president of ASUU said the claim by the government was not true as negotiation is still incomplete by both parties.

He said the representatives at the meeting do not have the final say on the matter as ASUU insisted the new proposal must be written down showing plans of action unlike all along since the commencement of the two-month-old strike.

He said: “It was just yesterday (Tuesday) that government sent the proposal to us without waiting for feedback before going to the public that we have reached an agreement. ASUU does not operate in that manner.”

“The ASUU team that met the Federal Government,” he noted, “would have to consult our principal over the proposal which we are already doing.”

“So, ASUU cannot make pronouncement on a mere proposal. Until our principal agrees, there is no agreement. And that is what we have always emphasised to government that we are going to consult our members and if after consultation, our members think the proposal is good enough, we will get back to government and tell them that now, we have taken a decision which becomes an agreement. But so far on government proposal, we have not taken a decision. And our strike is still ongoing.”

On whether there might be grey areas in the proposal, the ASUU chairman said there would be no consultation on clear ones.

“So, that is the level we are now. And we don’t have a final say on any proposal that is controversial. But for areas that are not controversial as I had mentioned, we will only need to confirm payment. If paid, fine. It then means that one is settled and we now move to another one that is yet to be settled. And the one that is not settled we will need to take feedback to our members and that is the position we are at the moment.”

Meanwhile, Palito Media reported that the federal government had said that it will continue negotiation process with ASUU on Monday, January 7, to resolve ongoing industrial action embarked by the striking lecturers.

Senator Chris Ngige, minister of labour and employment, said this in a statement signed on Saturday in Abuja by Samuel Olowookere, director of press, in the ministry. According to the statement, the meeting is in furtherance to efforts at resolving the on-going industrial action embarked upon by ASUU.

Title : Strike: We Don’t Have Agreement With FG - ASUU
Description : The Academic Staff Union of Universities (ASUU) has reacted to the claim by the federal government that an agreement was in place saying ...
Rating : 5

0 Response to "Strike: We Don’t Have Agreement With FG - ASUU"