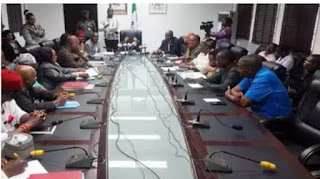 The Academic Staff Union of Universities on Sunday denied receiving the sum of N163bn from government in a bid to suspend the three-month old strike.

In a statement titled,  ‘Re: N163bn released to ASUU: Putting the record straight,’ signed by the Ibadan zonal coordinator of the union, Dr Ade Adejumo, the union, said, “Once again, the attention of our union has been drawn to another piece of misinformation which gives the impression that ASUU collects money from government.

“For umpteenth time, let it be known that our union is a patriotic organisation whose activities are driven by principled conviction that the resources of the country can better be managed for the ultimate benefit of the Nigerian society, especially the education sector which is our immediate constituency.

It added, “Even money meant for our salaries and other allowances come directly to the university administration which prepares the budget and manages it. ASUU members collect only their salaries as paid by the university. Contracts and all the capital projects are awarded by the councils that are appointed by the government, not ASUU.

“It is in the context of the above that our union calls on the vice-chancellors and council chairmen to stop behaving like vultures that wait silently by the sidelines, waiting for the game to fall only to descend on the carcass.

“They should join forces with ASUU in its struggles to attract requisite funding into our public universities rather than working at cross purposes with us. Part of the least expected from them is to come out openly to put the record straight each time the government comes out with the deliberate falsehood that money has been released to ASUU.”

The President of the Academic Staff Union of Universities, Prof Biodun Ogunyemi, had earlier on Saturday, similarly said that the Federal Government claim that it released N163bn to settle part of the demands of the union was misleading.

Ogunyemi, who spoke on the sidelines of the Nigeria Labour Congress meeting in Abuja, said, “The minister referred to the release of N163bn but that was not released by the Ministry of Education to revitalisation. That fund he alluded to was from TETFUND. TETFUND was there when we carried out the NEEDS Assessment in 2012. What we called Revitalisation Fund today is a product of that exercise of 2012. We have always drawn a line of distinction between what TETFUND gives and what we should access from the NEEDS Assessment Fund.

“They are different terms of intervention that should not be equated to one. TETFUND as an intervention agent is ASUU’s brainchild which became a reality. The funds from NEEDS Assessment is to fix specific items of deficiency in our system. Both Federal and state governments have now relinquished their responsibilities to TETFUND, they now hold on to it.”

Title : Strike: ASUU Breaks Silence Over Receiving N163bn From FG
Description : The Academic Staff Union of Universities on Sunday denied receiving the sum of N163bn from government in a bid to suspend the three-month...
Rating : 5